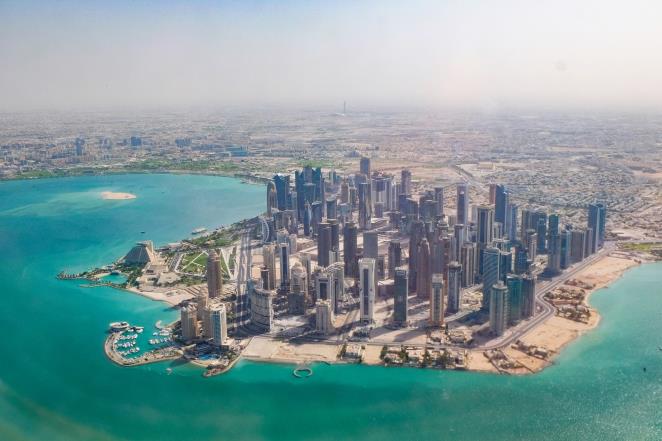 On a unique piece of land, surrounded by sand and water, the capital of Qatar shows itself as the calling card of the rich oil state. A fascinating city where nothing is crazy, but where authenticity is always hinted at.

In Souq Waqif it is remarkably cool. The scent of rose water and cardamom floats through the narrow corridors of stone and wood, which narrow even further through displaying burlap sacks full of herbs and pashmina in all colors. A green wheelbarrow is parked upright against the peeling white wall of a side path; his owner, a hamali with gray hair and a wrinkled face, is waiting in a distinctive Qatar red vest for someone to come and use his porter service. The atmosphere is relaxed; men sit in recognizable white thobes on low couches or cushions to smoke waterpipe or drink tea between the fluorescent lighted candy and spice stores. As I walk outside, past the Persian carpets, I am greeted by a shrill noise; In the courtyard, colorful collections of birds and other animals call for attention from their cages. Further on, along the paved pavement, people sit at small restaurants on the terrace, their falafel extra warmed by the Middle Eastern sun.

The souk in Doha, the capital of Qatar, feels a bit like a city in a city. It is a lively, almost traditional oasis in a country that evokes images of shiny high-rise buildings, oil richness and chic inhabitants and their brand bags. Qatar experienced unstoppable growth in the 1990s, which for the time being does not seem to be slowing down; Office buildings and luxury hotels are still shooting like magnificent mushrooms from the desert ground. But Doha, the very young metropolis on the Persian Gulf, appears to be full of small glimpses of Qatar from the past. of life behind it. The busy street in front of me is Al Corniche, a seven-kilometer coastal road that follows the curvature of the bay; this is the best place to see the evolution of Qatar, and Doha in particular. Traditionally this was the beating heart of the capital, the place where fishermen sailed into the city with their wooden boats. For years the economy of Qatar was driven by these dhows, and the large amounts of pearls that they transported to the souk, and eventually far beyond. When a way of producing synthetic pearls on a large scale was developed, trade collapsed. With the near discovery of oil fields, the economy picked up again fairly quickly, but the dhows became increasingly obsolete. Yet they are still there, wooden symbols of a past Qatar, floating against a backdrop of the high-rise of the new era, on the other side of the turquoise water. 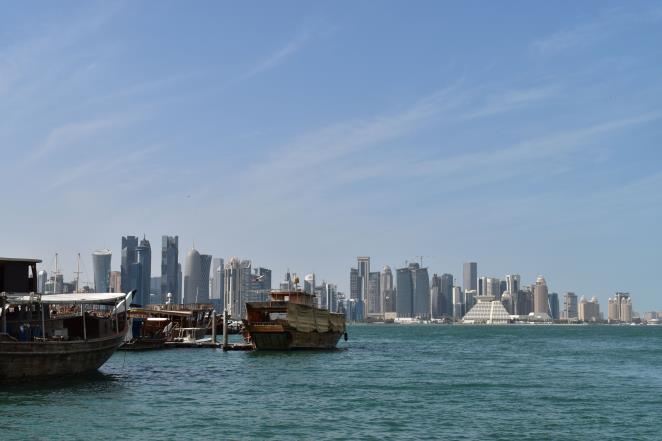 A special contrast is created when I step aboard an authentic dhow to absorb the shiny new part of the city. It is a beautiful, somewhat messy specimen that, like most other dhows, is now used for short trips across the Persian Gulf. Captain Babu, a cheerful Indian man around the age of 50, is satisfied with the blue water. He has been working on the wooden ship for two years. "I used to work in Singapore, Malaysia, China ... But I like Doha." He is smiling. "All those languages ??and different cultures, you won't find anything like this here." He might be right - less than 20% of the 2.6 million inhabitants of Qatar are Qatari.

Behind us, the hustle and bustle of Al Corniche drifts farther and farther, but directly to the north, the business heart of the city, the West Bay district, looms ahead. A zipper of shiny skyscrapers right on the water, like a Middle Eastern mini-Manhattan, with the Burj Doha as a striking center. The remarkable cylinder is an exception between the sharp lines and tall cranes that draw the skyline of Doha's business district. At night it is the star of the metropolitan light show that takes place on the water, but during the day it looks nicer. Another strange but iconic duck in the concrete bite is a pyramid-shaped building, strikingly smaller than its surroundings, at the very tip of the Doha Bay. "The Sheraton Hotel," Babu says. “Only 35 years ago this was the first luxury hotel in Doha.” The dhow bends over and right across the bay we now get another remarkable, but at least one such iconic architectural appearance: the Museum of Islamic Art . An eclectic building whose clean white lines contrast with the graceful manuscripts and ceramics that you will find inside, but with its arch galleries unmistakably Middle Eastern. Babu points me to the crescent-shaped openings that are visible at the top of the building. "It's like an Islamic woman in a nikab." The building is a metaphor for Qatar; it is new and modern, but breathes tradition. 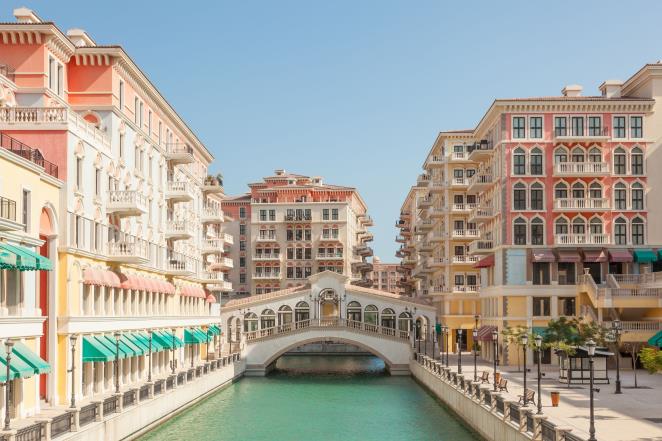 The dhow goes ashore in Porto Arabia, a marina in the middle of The Pearl . The artificial island group is a nod to pearl fishing with which the country earned its money until recently. You can see that clearly on the map: three bays that surround an island like oysters that lie in the middle like a pearl. Porto Arabia is one of those bays, packed with yachts from small to large, and surrounded by modern residential towers and chic boutiques in Mediterranean colors. The wealthy Qatari lives here. In everything, the mini-archipelago is at odds with its desert-like origins; the water is everywhere here. Walking along an embanked promenade, I end up in the most remarkable excess: Qanat Quartier. Canals of unnatural blue water splash against the walls of the candy-colored house blocks, like an amusement park-like ode to Venice. This is where the Qatar of image formation shows itself: modern, grand, yet effortlessly spared. But it lacks authenticity. I take a mint-green taxi back to the souk, where in the evening the rather deserted square appears to be a gathering place for locals who are ringing in for the weekend.

The next day, before the shiny entrance of the W Hotel Doha chic cars back and forth. Well-dressed men and women get in or out, they seem to literally shine in the subtle lighting that descends on them from the imposing facade. After another gleaming Mercedes, I see my elevator driving in front. He is quite out of tune: a big Toyota, snow-white, with gigantic tires. Behind the wheel is Mohammad, who moved from Syria to Qatar 13 years ago and can now be found in the desert dunes almost daily - for work but also for his free time. "It's a strange hobby, but everyone in Qatar goes dune bashen in their spare time. If I don't have to give tours, I will really let go. "He makes a serious face, but his eyes twinkle. "I'm not kidding, I now have a wife and child at home." 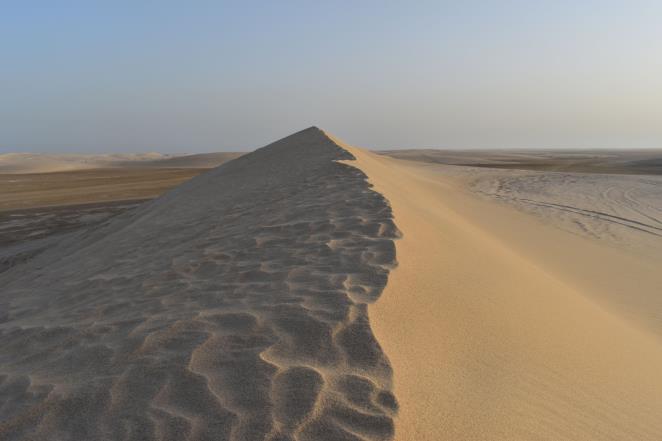 As we head out of the city it becomes slowly it becomes clear how a sharp contrast the capital forms with the rest of the small country. Impressive skyscrapers give way to simple apartment districts and ultimately a lot of arid soil and sand. Soon some sign of life off the highway disappeared.

At a small camp we finally stop. Arabic coffee in plastic cups, a toilet block and a dozen camels form the gateway to the desert of Qatar. In another time we had continued our journey on these four-legged friends, but they were unable to keep up with the local modernization. Cars are now driving down the road, into the dust, to let air out of their tires before they pull into the big void. "You want to be able to spring a bit with the soft surface," Mohammad explains. His cup of coffee spreads a spicy scent and he makes a somewhat doubtful face. "Although it has rained considerably in recent days. That changes the sand. "While Mohammad deflates the tires of his car a bit, I walk through the camels. I stroke one over his long neck; it feels a bit like a greasy carpet. Then Mohammad beckons: the dune bashen can begin.

That Mohammad knows the desert like the back of his hand appears when he smoothly drives up the dunes a little later. Once at the top a wide view awaits, waves of sand as far as it reaches. "I usually drive fairly quietly with guests." The rear-view mirror reflects that glint in his light eyes. “Or can you take a beating?” It soon becomes clear what exactly dune bashing is: tearing down the sand hills on a rotunda, sliding steeply down on the other side, then accelerating again and tearing, like a roller coaster you self-driving. At times we slide down a dune so steep that through the windshield I only see the approaching desert ground. Up to the horizon I am surrounded by sand, a serene landscape of hills and rough traces of car tires, on which the slowly setting sun casts long shadows. With sharp curves, the sand flies high up next to my window, and the sound of wheels in the soft sand sometimes sounds almost like a ship at sea.

After slipping and accelerating along for a while invisible route in the sand we reach the Inland Sea, a poetically named sea arm that travels far into the desert from the Persian Gulf. The first stars pierce the twilight and I am amazed by this place, less than an hour from the lively, ultramodern city. One of the many gigantic contrasts in such a small country, which turns out to be more than its shiny image.

Experience Qatar in complete luxury? That actually starts on the plane. The Business Class of Qatar Airways voted the best in the world, and that is no wonder: in the individual Qsuites you feel the ruler of the sky for seven hours. Your chair folds all the way to a bed, you will be served delicious food (at an attractively set table) and if you want to break an owl undisturbed, you simply close your suite door. Being pampered at high altitudes is unfortunately not cheap: an individual Qsuite costs from € 3,625 (return).