Etiquette during the Christmas dinner: "Don't talk about politics or religion" 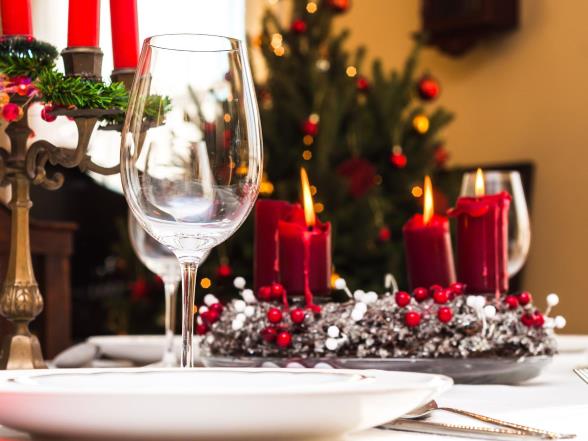 How should Christmas be at home at the table? An etiquette expert and butler give tips on the decoration of the table, the conversation at the table and whether or not you should bring a bottle of wine for the hostess.

Van butler Laurens Spanjersberg and etiquette -expert Anne-Marie van Leggelo-van den Berkmortel does not have to be so stiff and tight with the holidays at home.

"It is not a restaurant," says Spanjersberg. "Do something nice with the decoration of the table. For example, let a train ride over the table, or do something with lights. Use your imagination."

Regarding the signs, he is clear: "Get your most beautiful crockery from the cupboard. Or borrow it from your grandmother if necessary. And there may well be a piece of it off the plate. That is just chic. Of course, that does not apply to new plates. "

A table arrangement is not necessary, but it can be useful, according to the two experts, not to put certain people next to each other. For example, if your brother and your friend can only talk about football together, or if your grandfather thinks your little nephew is too busy.

"Also make sure that you do not include all busy or silent people ", says Van Leggelo. "Try to figure out how to get through the evening together. Changing halfway through, as it is called so beautifully, is also recommended."

Unwritten rule with the more official diners is that there is no talking about it politics or faith. "That only leads to a fight," said Spanjersberg. "If someone does start talking about it, just say we shouldn't talk about it. It's Christmas now."

A telephone on the table during the Christmas dinner, not called 'mess-up' for nothing, is of course also not done. "Nowadays, taking pictures of dishes is possible, nobody is surprised, but don't immediately post it extensively on Instagram," says Van Leggelo. "You wait with that."

Involve children in the Christmas dinner

And what do you do with any children? Can they stay at the table for so long? A tip from Spanjersberg: "Put the children at a separate table, and tell the eldest that he is the boss of the table. That's how it used to be at our house. Children like that, and keep it up longer."

Van Leggelo complements him: "What can also help is involving the children in the dinner, in the preparations but also, for example, in serving the plates."

Do you want to prevent yourself from sister is sitting at the table in a prom dress and your nephew in jeans with holes, be clear about the dress code in advance. "It doesn't have to be chic, or it does. But if there is a dress code, stick to it," says Van Leggelo.

The same applies to any costs. "It is of course quite possible that you pay for dinner together, but make arrangements about this. Do not send a Tikkie out of the blue afterwards."

Come on time and take a suitable gift

< p> Furthermore, if you are invited you cannot come too early. "Because the host or hostess is probably still busy with the preparations for the dinner," Van Leggelo explains. "And come fifteen minutes late."

If you bring a gift for the host - according to the experts, it is appropriate - do not choose flowers. "Or they must already be in a vase, the host or host must not have to do much about it. Because there is already enough to do."

Spanjersberg would not bring a bottle of wine, but rather something more original, for example homemade jam. Van Leggelo believes that a bottle of wine is quite possible, but according to her, a bottle of champagne or prosecco is even more festive. "They fit every dish. Incidentally, it doesn't mean that the bottle has to be opened the same evening."

In any case, it's not appropriate to drink too much during a dinner, the experts say, but whether everyone will stick to this this year is of course the question.