Father Thijs writes the sweetest rap for daughter (6) with down 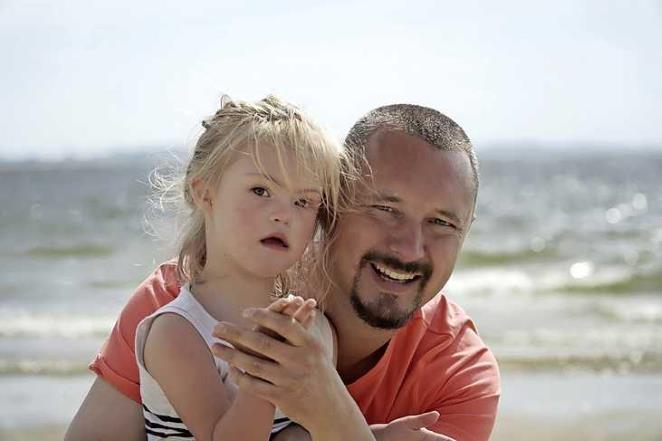 All tests showed a good result, but when the daughter of Thijs de Bruijn was born, it turned out that Eline (now 6) has Down syndrome. He wrote the sweetest rap for her, You & Me, to show and hear that it really doesn't mean the end of the world if you have a child with down.

© Thijs de Bruijn Thijs and his daughter Eline who has down .

"My message is simple," says the father of three. "There is such a negative image of down in our society, that's wrong. Children with down are normal children, with normal emotions. They are also sad and happy. They are sweet, fun and funny. Just like other children. They may need a little more medical care and guidance, but you can also have that with other children.

I am raping about that. I think it is a shame that these people are being discriminated against, that we have them removed. These people are a weak group that cannot stand up for themselves, while they are nice, sweet people who deserve to be there. "

"I enjoy Eline every day. We may have been lucky, but there are many down children like her. My song has been around the world and I get a lot of reactions from parents who recognize themselves in it. In the beginning they found it difficult to have a child with a down, but gradually they started to see the child for what it is and looked beyond the down.

The images we have of these children, therefore not correct. A child with down can do much more than you think. You don't have to worry about it after birth. That is a sound that you hear far too little. "

Thijs and his wife went through the third pregnancy in an exemplary way:" There was no evidence that anything could be wrong with Eline. When she was born, we saw that she was a bit limp and had small eyes. For me it was a big surprise when I heard she had Down syndrome. It wasn't fun.

I couldn't enjoy the first few weeks. We were worried about her future. Also because of the stories you hear and the negative image you have in your head. You project it on her and on her future. A doctor said it as follows: "You are in mourning because you do not have the child you had in mind. It is also getting used to the child that you did not want, but did get ". We had to adjust our expectations. "

" In the beginning I was in a deep valley, but luckily I became more positive every day when I saw what Eline could do. She did the same as our other two children, only at a slower pace.

She walked the same steps, but at her own pace. I have a deep bond with her. I don't see the down, I see my daughter. It is the outside world that puts a label on it. I see Eline and love her just as much as I love my other two children. "

" There are times when it is a little less fun, but Eline still lives a fairly protected life. She is not yet moving into society, but our grief has everything to do with the outside world. If we read the reactions under an article about the Nipt test, for example.

Why is such a test on down actually there? Why is this subsidized? What is your point? I think that as a parent a negative thought that these children should not be there. That there is no place for them in society. It makes me sad. Down is not unbearable suffering. I don't see my daughter suffering unbearably. So it is bad if doctors insist on an abortion. "

" That is also in my song, a piece about doctors with white coats. They can take you and not bring you back. So hide yourself. Fortunately they did not find Eline. It was safe with her mama's belly. "

" It is strange what we do. With which arguments do we justify this? As far as I am concerned, none is valid. And I have stood on both sides. I would like to make that clear. If I had known at the time, I might have made the choice to have the baby removed.

If it turns out that your baby is down, you are almost in the process of leaving it out get it. You hear too little about the positive sides, there is very one-sided exposure. That gives a negative image. As a parent, you have to be strong in your shoes to say, "We love it." Incidentally, I do not blame people for making that choice. I might have done the same. I blame society for being so busy. Where does this end? "

" Eline is doing very well, she is going to school. She learns a lot, reading, counting, just like any other child. With my song I hope to tell the whole story. I hope to influence people in my way. "