Grandma, tell us about the war ... 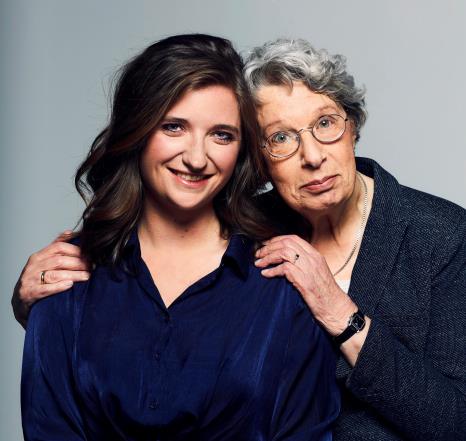 If grandpas and grandmas are good at something, it is telling about the past. Sonja was still young when World War II broke out. She looks back and shares her story with her granddaughter.

Sonja (85) was 5 when the war broke out. Later she worked as a humanist counselor and is married. Granddaughter Sjoera (27) is a project coordinator at an educational startup and lives together.

Sonja: “My father was Jewish, my mother was not. One evening my mother very carefully sewed a yellow Star of David on my father's clothes. Because I liked it so much, I asked if I could have one too. I found it strange that my father was suddenly no longer welcome on the tram and we had to walk to my grandparents on Sunday. He was gone overnight. In hiding. Nobody knew where he was, at first my mother didn't either.

She was a strong woman. She created a positive atmosphere in the house where she could, to burden me and my two brothers as little as possible with the atrocities outside. When the war ended, my father would return. Fortunately, she was right. But my grandparents did not survive the war.

My youth was certainly influenced by the war. Playing outside was only allowed near our house and as soon as the air alarm went off, everyone flew inside. Sounds of fighter jets and distant bombs were the order of the day. At school, the classes became increasingly emptier. One day, the boy's house with which I always went to school was nailed shut. I never saw him again. When I think about it, it still touches me deeply.

Despite everything I've been through, I've never lost faith in people. I learned this from my brave mother. War is timeless, but I would rather not be afraid of that. I have taught my children that you should never judge another person by his background, and that you should assume that the other person is good. Every year on May 4, I commemorate the consequences of the war and I hope with all my heart that it will never happen again. Let's be nice to each other and above all not lose confidence. "

Sjoera:" My grandmother's story makes me emotional. World War II comes very close by her experiences. There are many books and films that tell the story of the war, but it remains abstract. It is precisely through such a personal story that you can better imagine the impact of the war on affected families. Remembrance Day is an important moment for us. I am always silent for two minutes. Whether I'm sitting in front of the TV at home or on a beach in Spain.

I can still remember during a holiday on Terschelling with my grandmother and brother cycled home to be home before eight o'clock. We were late, so the three of us commemorated in the dunes. A very special, intimate moment, which still stirs up a lot of emotion in me. If I ever have children, I will teach them to handle the two minutes of silence with respect.

My grandmother taught me that you always love must go out good in people. I can't take it when someone makes a racist comment. I always say something about that. Recently I heard someone say: "Can jokes be made about World War II?" As if it doesn't matter now. That touched me. I think you should never joke about that. ”

This story is from VROUW Magazine. As a premium member you can now also read this story online.