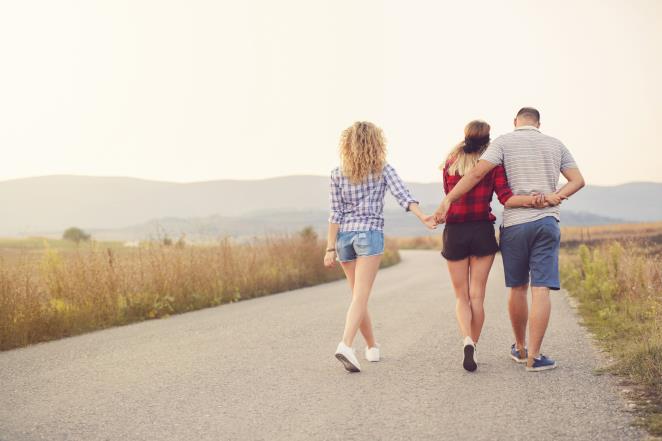 From the very beginning, Jitske (32) knew that her beloved Paul also has a relationship with Eline. In turn, Eline also knows of Jitske's existence. And no, that was certainly not always easy for Jitske, but now she sees it differently. "For me, love is beautiful when it is so free and without rules"

"At a network meeting I met Paul. He was one of the speakers there. A tall, handsome, charismatic man with a big bunch of curls. I literally hung on his lips. During the break I shuffled over to him as unobtrusively as possible, we made eye contact and after the afternoon program, we started talking during drinks. We appeared to have a lot in common and the spark jumped. Moreover, he had a lot of humor. When I walked to the car in the evening, I even felt butterflies in my stomach. What a nice man! I wanted to see him again. We had exchanged business cards. Once home I put on the bad shoes and sent him a message via LinkedIn in which I carefully suggested a follow-up date. I didn't know at all if he was busy or not, but I would notice that soon enough. He immediately replied positively and we were having lunch in the Amsterdamse Bos less than a week later. It was sunny that day and we decided to take a walk after dinner. Soon we settled in the grass. Paul took my face between his big hands and started kissing me softly. As two teenagers in love, we looked into each other's eyes. Both delighted with our being together and this more than perfect moment.

A week later we would see each other again at my house. That afternoon I changed my bed, put on my nicest dress and brought wine and all kinds of tasty snacks into the house. This would probably be a very romantic evening. My expectations were high. We ate together and kissed, but just when I thought he might ask if we could go upstairs, he said with a serious face that he wanted to talk to me first. Paul explained that he was polyamorous, which meant that he could love several women at the same time and have a relationship with several women. I didn't understand him at first. What did he mean? That he wanted to make a slipper once in a while and did not take it so closely with loyalty? Only when he revealed that he already had a relationship with Eline, whom he saw two days a week and who also just knew he was here with me, did it dawn on me. If I started something with Paul, I would not have him for me alone. It wasn't: me in, Eline out. He wanted us both. He makes that clear to me. Maybe it was the wine that softened the message, because I took Paul to my bedroom that night anyway. Then just a crazy evening, I thought. I dismissed the idea that he also had something with someone else. Just for a moment, because when Paul disappeared after midnight and went back to his own house, it felt like a huge hangover. The film of the two of us in bed turned on my retina and one thought kept repeating itself: what did he do to me, did he do that to her tomorrow?

Time and space for myself

I could Don't let Paul go. Everything he had told me, the conversations we had had, just stuck in my head. I started asking myself all sorts of questions. Share him with another? Would I be able and willing to do that? And what about: there is enough love for everyone; you don't want to be someone special? Or is that not necessarily necessary? At the same time, I knew that I, too, am not looking for the standard house, tree, animal. I had already had three longer relationships that were always on the rocks because I was never ready to live together. That gave my former partners the idea that I saw our relationship as something without obligation. And that was actually true. I just like to have time and space for myself, not to think that I have a man sitting on my couch every evening. For that, I really value my freedom. At the same time, I missed the intimacy that you experience in a relationship. I called Paul again. We talked for a long time, first by telephone and later at his home. Paul and I are both very busy with spirituality. I also strongly believe that you can be your own special someone, that you can learn to feel that you are EVERYTHING. If you look at it that way, you do not need that approval or undivided attention from someone else. It is of course the ego that rattles that your partner may find the other person more fun, special and smarter, and that you secretly come in second place. I decided to go on the adventure. Paul asked three times if I knew for sure. No, I didn't, but the only way to see if this relationship form would work for me would be to experience it. In addition, I really wanted to get to know Paul better, just like a normal love. We did that. We went to the cinema together, to dinner, to the beach. Sun coffee on Sunday morning. On the days that Paul was not there, I worked in my own practice, and from the moment he put his car in the driveway with me, I enjoyed being together. I was able to cope with this, also knowing that there was another 'Eline' who was two years younger than me, had a blonde bob line and went through life as an artist.

About three months after our first date went wrong. I went through my back, couldn't work and lay on the couch with painkillers. Exactly that week, Paul was away for a long weekend with Eline. Because I could not go in any direction, could not flee work or work out, my thoughts worked overtime. I saw them together continuously walking hand in hand in the South of France. Cooking together, sprawling in the bath, in the sauna, in bed ... Paul stroking her hair, whispering sweet words. I was completely crazy about myself. Was desperate. When I really did not like it anymore, I sent a very spicy app to Paul in which I wrote that I was creating the pain, and that I was looking for another partner, for someone who would be 100 percent for it at those moments. could be me and not with another. And that I couldn't handle it mentally, that dull poly-amorous thing. Less than ten minutes later my phone rang. It was Paul. He made me cry and brag, and suggested to talk about this quickly - the three of them.

Two days later, Paul and Eline were at my door. In the meantime I had gathered myself together again and felt strong enough to receive them. Eline reluctantly entered. "Pretty crazy, right," she said. She had an open look, dreamy eyes, a little snub nose, and a row of crooked teeth. She was not the perfect miss that I had imagined in my tense fantasy, but an "ordinary" young woman who apparently found it as difficult to meet me as I did her. I felt a burden slipping off my shoulders and shared with them in an honest manner that I had never felt so miserable, so lonely and so insecure in my life, and that it felt as indigestible that they were enjoying themselves together while I hung on the couch like a pathetic heap. And that I doubted whether I should continue this relationship. Paul just listened, did not try to dispel my doubts either. He only said: "What I have with Eline, I have with Eline, and what I have with you, I have with you. You are two completely different women, and I like both of you equally for different reasons. "I asked for a time to think, a time-out, to find out if this relationship type was really spent on me. I wanted to be with Paul, but I didn't have to go beyond my own limits, not at the expense of everything. We have not spoken for two months. I have read, meditated, learned a lot about love. I consulted myself: am I okay with myself? Do I love myself? And can I handle it if there is another situation where Eline and Paul are on the road together? The day I could say "yes" to all those questions, I drove to Paul. He welcomed me with open arms.

All three own a house

Much has changed since then. I no longer think that Paul could love two women (ratio), but I feel that it's okay, which is something completely different. In fact, I wish them happiness together, because it does not in any way detract from what Paul and I have together. For many people in my area this sounds very strange. They would never do or want to do it themselves, and at the same time they always respond very curiously to this deviant relationship and ask me the shirt. The most frequently asked questions are whether I am also considering adding another man, and whether Eline and I are more than just "friends". I am one hundred percent straight, so I have no intimate relationship with Eline. We also all live in our own house. Furthermore, I do not rule out that I will ever get something with another man. Who knows, maybe I will meet someone and fall in love instantly. It is a nice idea that Paul would be very open about this and that it does not necessarily mean the end of our relationship. For me, love is beautiful when it is free and without rules. That keeps it light and playful. Recently Eline and I sat together on a terrace. Her cell phone lit up and I saw a photo of her and Paul on her background screen. For a moment I felt that "old" emotion of uncertainty about my status again. Just for a moment, though. It's a good thing. "