Josefien lives with her family in a converted fruit store 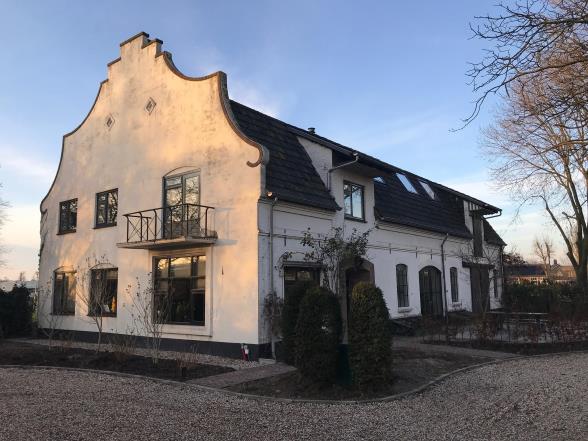 A spacious barn that belonged to a villa, expanded as a fruit store for the auction, converted into a house. That is the story behind the parental home of Josefien Kirch-De Groot. 2.5 years ago the resident returned with her husband and two children. "We completely rebuilt the interior and rebuilt it."

A large part of the former fruit shed in Zetten in Gelderland was uninhabited for a long time. The front was used by different residents, but the back remained a vacant storage. Until Kirch's parents decided to include that piece in the house. Although they only kept it on the ground floor.

"There was a gigantic attic above that was never used", the resident tells from the kitchen, which looks out onto a living room with a fireplace. A spacious open void further makes the timber frame of the roof clearly visible. "My parents kept everything in this section on the ground floor, but we wanted to make much more use of the space. We devised the entire design ourselves."

they took their own account, because husband Bram is a contractor. Kirch-De Groot explains what had to happen before they could inhabit the space. "Everything has been removed. Including ceilings, floors and electricity. Only that process took a month. After that a new roof was put on and we now have an extra insulation wall."

"The walls were anyway almost half a meter thick ", says Kirch-De Groot about the former storage and cold store. "So that insulates very well. Last summer it stayed nice and cool here. The windows still have to be replaced. That is now only glass, so you can still feel the wind coming in during the winter."

< p> The resident offers a tour, starting in the front part. "The idea is that this will be the wing for the children," she explains. "The first floor has a separate bathroom and two bedrooms, connected by a walk-in closet. On the ground floor, where the living room and kitchen used to be, there is now a TV room, playroom and study.

Mix of old and new

The television room is modern and sleek in design, but now also has clear hints to old times, with a cradle from 1726 in the corner. "Babies from my husband's family have been in here" , says Kirch-De Groot. "My husband himself too, and then our own children. We are going to put the all-burner that used to be here in the living room back again. "

That mix of old and new can be found everywhere in the Zetten home." That has been the most important thing for us ", explains the resident. "I really like clean interiors, but we wanted to make those frames stand out. And in the bathrooms and toilets we have placed old-fashioned tiles, to bring that farm-like character back. "

To make the construction with an open void possible, a number of standing ones had to be used in the former storage. wooden columns were installed, and a new solution was also introduced horizontally: because the upper floor was partially removed and the supporting beams were rotten, tie rods were replaced. "Otherwise the façade will change its own corridor, "explains Kirch-De Groot." But we could use the rods to hang lamps again. "

Question marks in the attic

Also the part with the open void has two bedrooms on the first floor, and there is now another attic above the front house, which is currently under construction, another place with a lot of history, says Kirch-De Groot, although in this case many questions remain unanswered.

"In a shielded corner was a kind of kitchen with a few greenhouses ", says the resident. "There were old newspapers. It is a pity that nothing else is known about it. Maybe someone went into hiding during the war. We asked about this, but we didn't get anywhere."

" I am happy that we have chosen this house, "says the resident. "At first I was a little worried that it would continue to feel like my parents' house. The garden doors and stable windows, for example, were already there. Or you have such a moment that you want to press a light button that is no longer there "That really had to get out of my system."

"Now that we have also tackled the garden, it really starts to feel like our house," says Kirch-De Groot. "My parents live in a little village away. It was difficult for them to leave here, so they really like it that we still have it now. Every time they come in here, they are surprised how it has changed. . "