Maud started her own daycare center for her multiple-restricted daughter 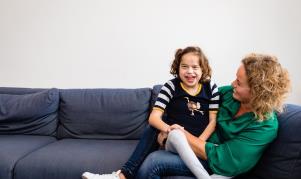 Suus (12) is severely multiple restricted and therefore cannot do anything independently. That is why she goes to the daycare center every day. Mother Maud Halkes thought that the regular KDCs lacked the time to do more than just care and therefore started their own daycare. "Suus was waiting for attention half the time because no one had time for her and she can't do anything herself."

At the birth of their youngest daughter, Maud and her husband (47) knew not immediately that something was wrong with Suus. She had had several minor surgeries, but it was only later in life that she was severely multiple restricted. She cannot talk, walk and is dependent on others in everything she does.

At the shelter where she first went, every supervisor supervised four kids with a handicap. They ensured that everyone received tube feeding and was cleaned, but had little time to do something else in addition. That bothered Maud. â € œMy other children (20, 19 and 16) receive homework support at school, go to sports clubs and have a good life. Suus was waiting for attention half the time because no one had time for her and she can't do anything herself either. I did not want that for my child.â €

So Maud searched further. She found another daycare center in the area, founded by a number of mothers with the same concerns. â € œThat impressed me so much. Unfortunately it was too far away. I thought: “I can do that too!” Together with the board - consisting of five volunteers - I therefore set up a center myself: the Attention Lab. We have raised funds and organized campaigns to pay for the renovation and furnishing. The care money can now be spent entirely on the children and with the remaining money we can hire competent supervisors.â €

Maud could spend all her time in the Attention Lab because she had no job. Two years after the birth of Suus, she had chosen that because she was more often with specialists than she was working. â € œNow I still have a full-time job, because lately I have worked seven days a week. Fortunately I don't do that alone, but together with the board. My husband also helps. He is just as involved.â €

The Attention Lab is housed in an old kindergarten in Rijswijk that has been completely converted and adapted for children in need of care. Maud: We received support from all corners. For example, a painter wanted to paint everything for free and we got the paint as a gift from a store. As a result, we can really spend the care money on the kids, so we now have one companion on two children. In addition, there are volunteers to help with all kinds of chores. In this way the supervisors who are employed can really be busy with the children.â €

One of the goals of the daycare center is to teach the children to communicate. â € œThey cannot talk and therefore cannot state what they want or do not want. For example, my daughter started biting herself out of frustration because she couldn't express herself. We let the children move more and participate in society, because now it often seems as if they are not there. So we go shopping with them and they celebrate carnival together with the primary school in the neighborhood.â €

At the moment six children are being cared for and there is a maximum of eight places. If MaudÂ thinks about the future, she sees an expansion ahead of her. â € œIn the end, we also want to open a day care. Children from the age of 18 must go to day care instead of day treatment. That is something for in a few years, now we first focus on the realization of a therapeutic swimming pool with a water temperature of 33 degrees. "

Maud hopes to raise the money for this with a sponsored bike ride on September 28. Around 80 people have already registered.

Do you want to share a story with the editors?

Then send a message