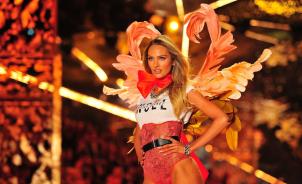 Model Shanina Shaik told the Australian newspaper The Daily Telegraph that there will be no Victoria's Secret show this year. Enne, that is the first time in 24 years.

"Unfortunately, this year it will not take place, which I get used to because I would normally be training hard for the show. But I know for sure that something will happen again in the future, "says Shaik. She also indicated that the lingerie brand is working hard on their image.

The lingerie brand is also working hard on its appearance. Victoria's Secret was in the news several times, especially after it turned out that owner Leslie Wexner granted his good friend Jeffrey Epstein access to young girls who worked or wanted to work for the brand. Epstein is currently in jail for abusing underage girls, waiting for his trial there.

That the popularity of Victoria's Secret has declined in recent years is not entirely unexpected. According to viewers and fans, it is 'no longer of this time'. The thin models would paint an unrealistic picture and thereby give young girls the wrong example.

A message shared by SHANINA SHAIK (