Proven: on average, a couple is together before they get married 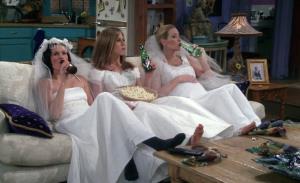 & # 169; Marie Claire Proven: that is how long a couple is together before they get married

More and more couples are no longer in a hurry to get into the wedding boat. Modern couples rewrite the rules when it comes to 'getting married' with the love of their lives.

Read also: Millennials spend this huge amount of money on their wedding on average

According to a survey by Bridebook of 4,000 newly married couples, the average couple spends around 4.9 years together before they promise each other eternal fidelity. We also spend less on an engagement ring and originality comes first. The survey also shows that we mainly choose to marry at a slightly older age compared to our previous generation. For women that is around 30.8 years and men are often 32.7 years to be precise.

The vast majority (91%) say they marry to confirm their love for each other, when a small number (2%) say that social pressure drives them into marriage. Also financial reasons (2%) and because it is convenient (2%) are some reasons why couples put the ring around their finger. Conclusion: "Marriages are becoming stronger than ever before, relationships are happier and couples are more independent and determined in their choice," said Hamish Shephard, founder of Bridebook.