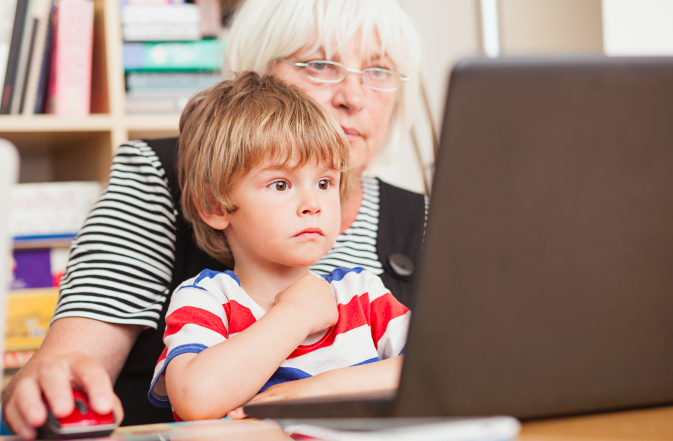 COLUMN - Suddenly we were allowed to tutor our teachers. Some grinned when we were mistaken. Because yes, we had trouble with it. After all, we always said "you" to our parents?

My brothers and I were nicely raised. Too neat, I think sometimes. Please, thank you, introduce yourself nicely: exactly as in that Doe Maar song.

Of course we have now arrived in other times. I have no problem with my grandchildren addressing me with "you" and "you". I have three.

When our son Patrick married Karin, she was pregnant. I became a grandmother when I was young. My husband and I enjoyed Olav and looked after us sporadically. We were still working and had a busy social life, so there was no fixed babysitting day. We didn't want to either.

Patrick and Karin had their hands full with the baby. Crying a lot, sleeping badly. Fortunately, that resolved itself.

When Olav was five, I was declared redundant. I didn't really like working and financially we could afford to avoid looking for another job.

Now that I had more free time, Patrick and Karin saw their chance: whether I would finish Olav was able to pick up from school once in a while? I had no problem with that. But yes, one thing leads to another. Before I knew it, I was stuck with an afternoon. I regretted agreeing to that.

Because Olav was not always such a cute boy. He could be sweet and affectionate, but sometimes he got angry. Then he stomped hard in a puddle in the schoolyard when classmates were nearby. On purpose.

He sometimes ruined a birthday and I had to fight several times if he misbehaved while playing outside with other children. He also used curse words he was much too young for.

I was shocked to try to correct him, but then Olav was offended. Or he called out, "You are not my mother!" Canine brutal. Like many children, he tried to go as far as he could. I didn't even blame him, because a child is a product of his upbringing.

It turned out that Patrick and Karin rarely intervened. But how do you tell your son that he is tackling parenting incorrectly? Or your daughter-in-law? She is more likely to take advice from her own mother. My husband said, "Don't get involved." Occasionally I made cautious suggestions, but Patrick and Karin did not listen. I stopped reporting all incidents to them because there was no point.

I felt powerless and was very reluctant to look after Olav. My husband had a good influence on him, but of course he was not there during the babysitting afternoon.

Then Karin became pregnant again. I hadn't counted on that anymore and I feared that I would be called on again. In the meantime I was busy volunteering and I could honestly say that - unfortunately, unfortunately ... - I had no time at all.

Olav is now a young teenager. He prefers to isolate himself in his room, as many adolescents do. He is no longer so cheeky, rather indifferent. "Will be fine," says my husband optimistically. I'm still not comfortable with it.