The best beaches of the Albanian Riviera 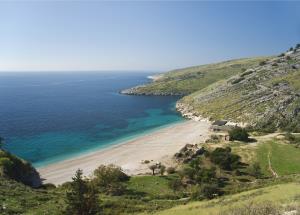 & # 169; Lonely Planet The best beaches of the Albanian Riviera

The rugged coastline of Albania, with traditional villages hidden in secluded bays and golden beaches surrounded by azure water, was a true revelation when travelers left the country ten years ago first discovered. Since that moment, the last pristine beaches in Europe have changed dramatically, you hardly recognize them back. But there are still plenty of reasons to visit the beautiful coastline where the Adriatic and Ionian Sea meet.

You may have heard of the Albanian Riviera and its beaches, who were once praised among the backpackers. The names of these beaches were equivalent to unspoilt strips of beach, rolling hills and olive groves, authentic waterfront accommodation and grilled meat with cold beer. Unfortunately, that authenticity has disappeared: asphalt roads connect even the most remote villages in the Riviera with hotels and restaurants, while holiday homes on the coastline shoot like mushrooms from the ground. Nowadays you are more likely to share a spot on the beach with a family of day trippers from Tirana than with a group of international budget travelers. Fortunately, despite the changes along the coast, there are still plenty of idyllic and breathtaking places to see. This is some of the best places.

This is the first accessible beach in the Riviera after the steep descent through the zigzagging Llogaraja pass. A new motorway leads you straight from the main road to the beach, which consists of nothing more than a strip of white sand and rocks, apart from a nightclub that attracts large crowds of people in the summer. In addition to the night club, there are a number of cafés, a pizzeria and a handful of camping pitches. Perfect for beach lovers who want to escape the crowds, only want to camp and swim undisturbed.

The beach of Dhërmi is one of the best known in Albania. It is a beautiful white rocky beach, several kilometers long, surrounded by deep blue water. It is very quiet outside of the high season and although it can get quite full in the summer months, the beach is long enough to find a quiet spot, even mid-August. The coves and smaller bays are perfect for adventurers, such as the famous Drymades beach. Here you can spend the night at a number of hotels on the beach itself.

South of Saranda, the unofficial capital of the Albanian Riviera, lies Ksamil: a perfect location, a stone's throw from the Greek border. The three small islands, surrounded by a turquoise bay, are easy to reach by swimming or sailing and it is always less crowded than on the busy city beach. Ksamil is an important place for the locals, because of the many travelers who stay here in the summer, but even during that period the islands offer some kind of peace. Corfu can be seen from a distance (this part of Albania is the closest to the island) and the ancient city of Butrint, a UNESCO World Heritage Site, is slightly further than Saranda, which makes a combination of beach and culture easily possible.

{img1 } & # 169; Offered by Pijper Publishing BV The best beaches of the Albanian Riviera

This charming cove is often overlooked by travelers going straight ahead to Saranda, a little further. Bunec is quiet and somewhat unconventional, with a white pebble beach that is divided by a river that flows from the mountains. The sunset here is absolutely beautiful and the beach is a good option for those who are looking for a little more comfort, but still want to stay in an unspoilt place. The Bunec Beach Hotel has beautiful double rooms on the water. There are also a number of cheap camping spots and simple cafés. Apart from that you will find nothing but silence and waves here - and that is exactly why you should go here.

The The sleepy village of Himara is a famous stop on the tourist route. Despite its growth over the past ten years, the village has not lost its charm, although the beach now attracts many people in the summer. Therefore, go three kilometers to the north, to Livadhia beach. That is a wide and long, white pebble beach, surrounded by rolling hills and clear water for swimming. In the village itself, Potami beach is a good alternative to the main beach. You will find this beach south of the center, along the large rock that divides the village in two. 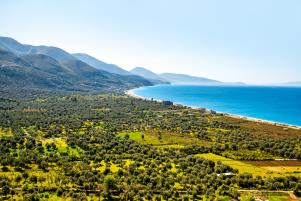 & # 169; Offered by Pijper Publishing BV The best beaches of the Albanian Riviera

Borsh is the longest stretch of beach in Albania. Seven kilometers of breathtaking nature, with an impressive road that leads to the open plain where the eponymous village looms from afar. Borsh is strangely little touristy, despite its community and bustling olive oil industry. On the beach there is nothing more than a number of improvised restaurants and bars. It is inevitable that this will soon change when project developers focus on the empty plots at the edge of the beach. So come now to enjoy this magical place.