"The big lack was already there when my husband was alive" 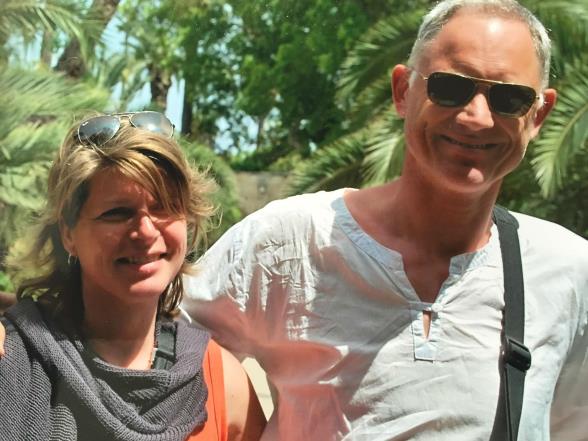 Jan Willem (58), the husband of Margreet Mantel (52), died at the end of last year from the effects of FTD (Front Temporal Dementia). "The great lack was already there when Jan Willem was alive."

They have been together for more than twenty-five years. They have two children who are now (almost) grown up: Renée (20) and Jord (16). The documentary Papa was made about the oldest, Renée, in which she shows what it means for her to have an incurably ill father. Renée has now left the house.

"It was love at first sight. We saw each other in line 12, "says Margreet. "I immediately thought it was a nice guy. Weeks later I was with friends, we threw snowballs and I saw him again, then it turned out to be something.

Jan Willem was a podiatrist, I eventually went to work with him. Did the administration. He did the care, I the rest. In November 2012 I noticed that there was something. So he said no more to patients. He became increasingly quiet and we thought he was a little overworked, stressed.

We went to the doctor and investigations followed. He could no longer work and the practice was taken over by dear colleagues. I had already found another job; I had to take care of our future.

If I gave him a kiss, he would give a kiss back. But the deep emotion, the spark, was gone with him. It had become a technical kiss. I also had to ask for a cuddle. Ask if he just rubbed my back. He no longer knew how to show affection. I could tell from his face that he was happy when he saw me.

I did see the recognition, but he stopped talking. His words had dried up, he reacted differently. That was also very difficult for our children. He never asked how it went. At school, for example, what the Cito was like.

My daughter said, "Daddy is still there, but he actually died for me." A hostess in the nursing home asked if he had children and a wife had. He walked away, came back a little later with a magazine that Renée had made for us and showed the photos.

He also tapped on his wedding ring, so off, I am married. Probably more came in than you thought. That's why we didn't want to talk about him in front of him. Little came out, but you didn't know what was stuck.

When he was still living at home, more and more insights disappeared for him. He no longer knew how pasta was cooked in the pan. Then he put the pasta in if the water wasn't boiling yet, even though I learned to cook from him.

He also didn't know how to stick a tape. He knew in traffic that red means stopping, but he was no longer patient. On the bike it became too dangerous.

With the children it didn't work anymore either. Jan Willem became compulsive. I had to protect them because he was constantly on top. They could not take a step, or he was there. He also became suspicious. He was constantly calling me and asking where I was.

Because I was his grip, he wanted to know where I was. Demonstrated claiming behavior, I could not go any further. Then I had to take the biggest step in my life: have him admitted.

That has given a lot of peace to the family, but you also have to find a new balance again. He first went to day care, which also gave him peace. At home he received too many incentives with the children in addition. Later he also lived elsewhere, where they could take good care of him. I went there three times a week to swim with him, for example.

I still try to remove the taboo about FTD, to tell me, to get involved for FTD companions. It gives me energy that I can do my bit that way. My husband couldn't help it that he did that, it's the disease. I explained how things were around here. He sometimes went to see children on the square.

So I tried to explain to them what was going on. I have distributed a letter with a brochure about FTD in the area. I also gave an interview to the local newspaper, in which I told what was going on with Jan Willem. You cultivate understanding and receive a lot in return.

We were diagnosed in January 2013, when he was just 51. In June 2012 we still thought that Jan Willem what was overworked and the advice was to work a little less. When he was admitted by the neurologist in November and neuro-psychological examinations followed, I started looking for the symptoms and so I came across FTD.

I was almost "happy" with the diagnosis; I realized that there was something about him, although I didn't know what. There are many misdiagnoses, I know from fellow sufferers. People have gone through a long search before being diagnosed and sent from the box to the wall. Sometimes even to marriage therapy.

People end up in psychiatry, or a woman says, "My husband has changed so much," the couple are getting divorced. Patients do not feel sick. Jan Willem whistled the doctor's practice after diagnosis. While he had always said: "Give me a syringe if I get demented."

FTD is also often missed by GPs. I know of three very young men who have this, in their early 30s. Initially people thought of a burnout or stress. Sometimes you are six or seven years further before the diagnosis is made. Because patients don't feel sick, they think you want to get rid of them.

That sometimes makes it so difficult. Your husband has actually died while he is still there. He is no longer who he was. It is chronic mourning, you say goodbye little by little. There is no more together. You also hear that from fellow sufferers.

Partners feel alone for a long time. You also have to do everything on your own: making decisions, working, caring, the children ... People with FTD also die earlier. They die from the effects of dementia in a time frame of two to fifteen years.

The younger you get, the more progressive the disease is. I knew a young woman of 41, who died two years after the diagnosis. She left behind a man and two young children.

Through the FTD fellow sufferers I met people who face the same challenge. Companions understand exactly what you mean, half a word is enough for you. Some of whom the partner stays in a nursing home have a new relationship. I too now have a new love.

Having a new relationship has nothing to do with love for your love, that is independent of it. At a given moment you miss a buddy, an arm around you. Because it is difficult for all fellow sufferers if their partner drops out. "