The parenting issue: should my child already help in the house? 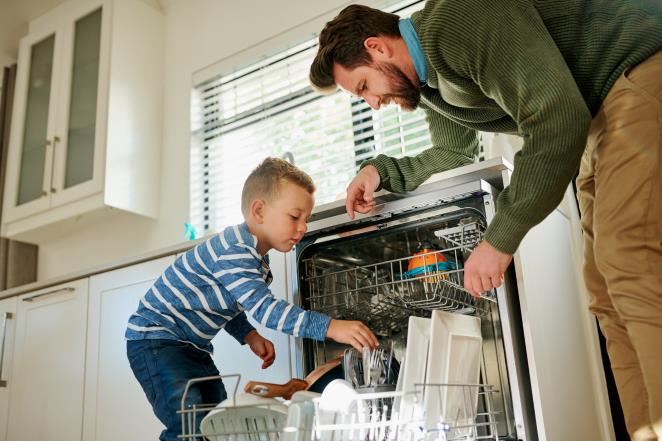 Erwin thinks it's time for his seven-year-old son to help with some odd jobs around the house. His wife disagrees. How do they do this?

His son doesn't really have to brush all day, but helping out at home Erwin finds the most normal thing in the world: "Milan really doesn't do anything at all house, at most hanging his coat on the coat rack. I think it is high time that he also took on some tasks at home. When I was as old as he was, I was already washing dishes with my older sister. "

"Milan does not stand out, probably because my wife is holding him a hand over him. He does not have to do anything about her, because she finds that pathetic and she finds him too young for this. It seems me nonsense, he is no longer a baby. Who is right and what can my son handle? "

A round of Google learns that a lot of lists are circulating about what tasks children should be able to do at what age. Dave Niks from The Family Psychologist can be brief about that: "What chores can a person physically do when he is seven years old? Well, quite a lot. But that's not the point here, just as it is not about who is right Why does one wants the child to help and the other does not want it? "

" There is always a deeper layer behind it. Perhaps the mother used to have to do a lot in the house and she thought: "if I have children later, I take a different approach. "That may be a good motive to save your children some tasks, but as a parent you have to name that to your children. Say that this is not normal and by no means everyone The danger of this is that your children will not be able to bake an egg when they leave the house. Then your good intention will work against you. "

The reason why a child must help is just as legitimate says nothing. "Many parents want their child to realize that not everything happens by itself. A child is part of the family and everyone contributes, so does he. That is part of the development. You do not have to go deep into your child to throw, start with small things like putting their own plate in the dishwasher, setting the table and tidying their own bedroom Some children find it tough to be able to do things themselves and to help with it. road to independence. "