The undiscovered Spain: a road trip through Extremadura 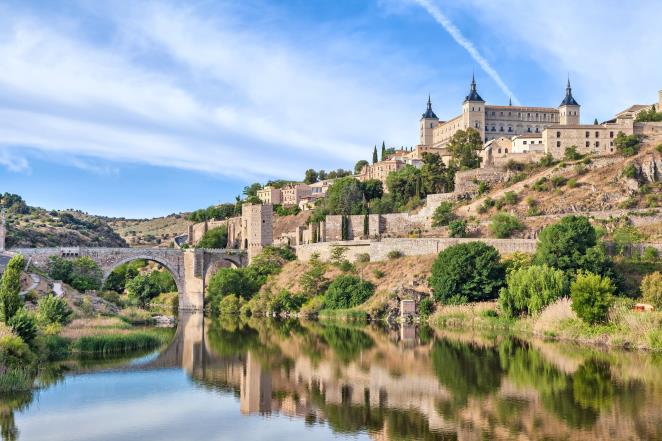 © Lonely Planet The undiscovered Spain: a road trip through Extremadura

Extremadura is often underestimated or even forgotten, while it is actually one of the most fascinating regions of Spain. Here you will find a mix of history that changed the world and contemporary culinary highlights.

In this area bordering on Portugal, the birthplace of many a conquistador and the past still depends on it. air. Visit Extremadura and discover old towns where time has stood still, crumbling castles, serene monasteries, beautiful nature and regional mouth-watering cuisine.

This seven-day travel plan assumes that you starts in Madrid, from where it is a three-hour (300 km) southwest drive to Cáceres. But you can also start in Seville and drive north. Or in Salamanca - then head south. April, May and September are the best months to explore the area. Although most of the following destinations can be reached by bus or train, we recommend that you go by car. You then have the flexibility and freedom to get the most out of your journey.

Or it's because of the urban buzz of Plaza Mayor, or the guitar note that resonates loom in the streets of the world heritage site Ciudad Monumental (Monumental City): the unique atmosphere of Cáceres enchants.

Walk through the 18th-century Arco de la Estrella and dive into the old part of the city. For a breakfast you visit the artistic Los Siete Jardines. Then stroll along the meticulously carved stone facades of stately Renaissance mansions and palaces and explore the Santa Maria, San Jorge and San Mateo plazas. The excellent Museo de Cáceres is certainly worth a visit. But also take a tour through the lush Palacio de los Golfines de Abajo. Do you still have puff left? In particular, climb the steps of the 12th-century Torre de Bujaco.

In Cáceres you will find some of the tastiest dishes in the region. The elegant Spanish-international tapas are a real treat. For example, in the chic, chock-filled taparia (tapas bar) La Cacharreria, in the old town, you can enjoy steak in creamy local Torta de Casar cheese. The most refined dining experience of Extremadura is Atrio. Continue the evening in style with cocktails between overgrown walls at El Corral de las Ciguenas or with craft beer at Las Claras.

The snow-white Atrio is a dreamy five-star hotel in the style of the old City. Hotel Casa Don Fernando offers stylish rooms, right on the Plaza Mayor. 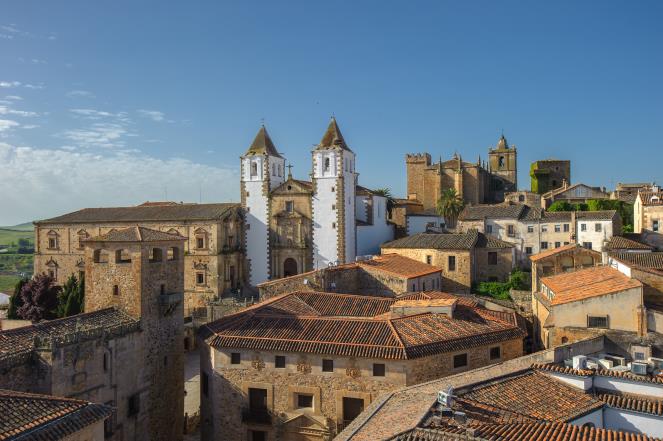 Get up early. Today you will discover the rolling nature of the 180 square kilometer Parc Nacional de Monfragüe. This park is a paradise for birdwatchers. More than 75% of the protected bird species of Spain call it their home. The park, which is surrounded by hiking trails, is also a playground for outdoor enthusiasts.

From the picturesque Salto del Gitano or Castillo de Monfragüe you can see a flock of griffon vultures. Other feathered friends you will find are the protected Spanish imperial eagle, the black stork and the black vulture.

The main visitor center of the park is in Villareal de San Carlos, 75 kilometers away northeast of Cáceres. Visit the Restaurante Monfragüe here for a meat meal that typifies the cuisine of Extremadura. South of the park you can also find an information center in Torrejon el Rubio.

Monfragüe is a comfortable day trip away from Cáceres. Do you still want to stay the night? Casa Rural Monfragüe, in Villareal, has rustic, colorful rooms. 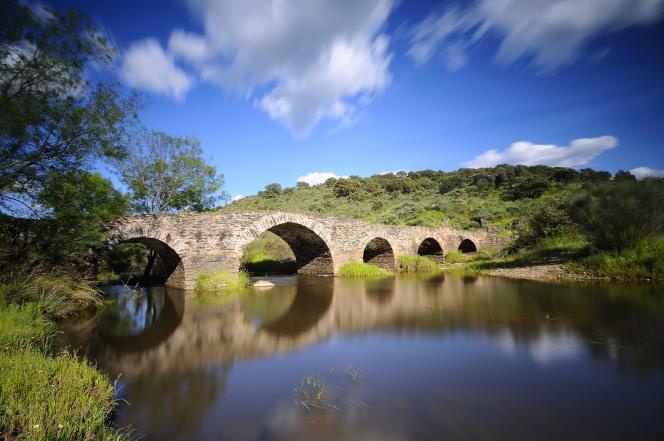 Day 3: Trujillo and the New World

Trujillo is about 55 kilometers east of Cáceres. Spain's most famous conquistadores left for the New World in the 16th century.

With such a past it is no surprise that the time-worn Trujillo is almost out of z ' n joints is bursting with splendid Baroque and Renaissance palaces, beautiful stone carved facades, hidden aljibes (Cisterns) from the time of the Moors, dazzling church spiers and lush gardens filled with colorful bougainvillea.

Under the stately bronze statue of Francisco Pizarro you will find Meson La Troya. In this restaurant you can recharge your batteries with the legendary large portions of typical regional dishes. Then burn the gained calories by exploring the steep walled old town center. If you want to know more about the five Pizarro brothers - famous conquistadors - you should visit the 13th-century Santa Maria la Mayor Church and the 15th-century Casa-Museo de Pizarro. Time for a final stop? The mysterious Moorish castle from the 10th century is the crown jewel of Trujillo and should not be missed. For dinner you sit down at El 7 de Sillerías; this restaurant proudly serves the best meat meals in the local style.

Posada Dos Orillas is a converted house from the 15th century. Here you will find attractive rooms with a colonial touch. 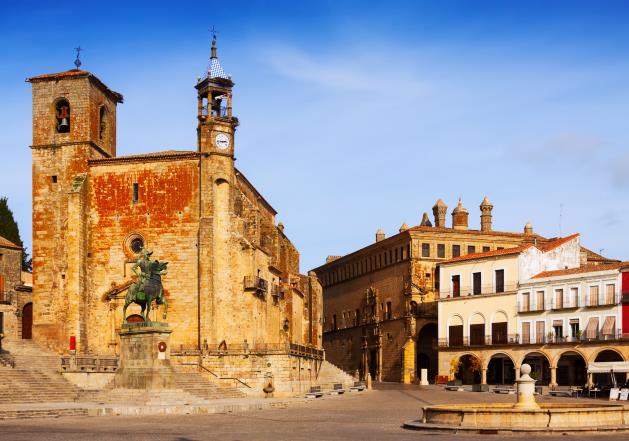 Today you will wait for a 78-kilometer pilgrimage east to Guadalupe. The reward? The beautiful Real Monasterio de Santa Maria de Guadalupe. According to legend, this monastery was built on the spot where a 14th-century shepherd found a wooden statue of the Virgin Mary. The cult of the Virgin of Guadalupe was taken to the new world by the conquistadors from Extremadura. As a result, the Virgin is the patron saint of large parts of Latin America. Pilgrims from all over the world still flock to Guadalupe to kiss the mantle of the wooden statue.

See the monastery and its extravagant collection of art, jewelery, decorated manuscripts and other resources. You will also find two smaller monasteries here - one in the 14th-century Mudejar style and the other in the Gothic style.

In the Hospedería del Real Monasterio you can dine and sleeping in characteristic, antique rooms, right next to the Gothic monastery. 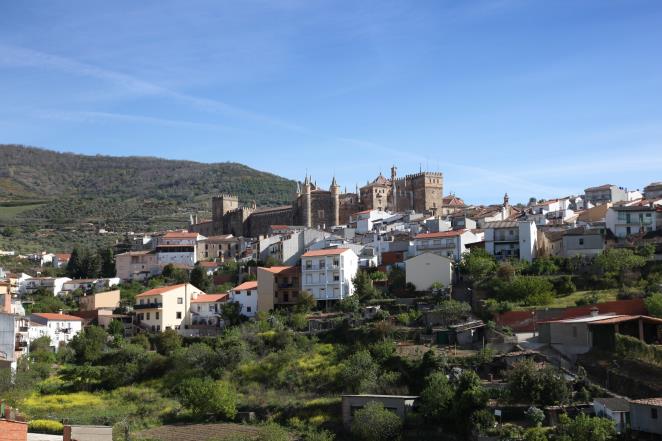 125 kilometers to the southwest of Guadalupe lies Mérida, the capital of Extremadura. Mérida once ruled the Roman province of Lusitania, so the city is crammed with the most beautiful Roman relics that can be found in Spain. You need two days to explore this city well. A combination ticket costs 12 euros and gives you access to most sights.

Start with the breathtaking Museo Nacional de Arte Romano and continue to the Teatro Romana. This theater dates from 15 BC and can accommodate up to 6,000 people. Then walk down along the Templo de Diana, from the first century BC, and admire the elegant Puente Romano. Then jump into the future for nine centuries, to the adjacent Moorish Alcazaba. Have you been hungry for 1000 years of history? The El Trasiego restaurant is close by and serves delicious contemporary meals. Among the other historical treasures of Mérida are the Acueducto de los Milagros, the Cripta de Santa Eulalia and the Roman circus, dating from the first century.

Mealtime! The stylish Tábula Calda prepares Spanish favorites with ingredients from the region and La Bodeguilla is at least as enticing with classics from Extremadura - from juicy grilled meats to dishes with the most refined jamón (salted ham).

Close your eyes in the surprisingly fresh Hostal Emeritae or in one of the multicolored self-service apartments offered by Capitolio. 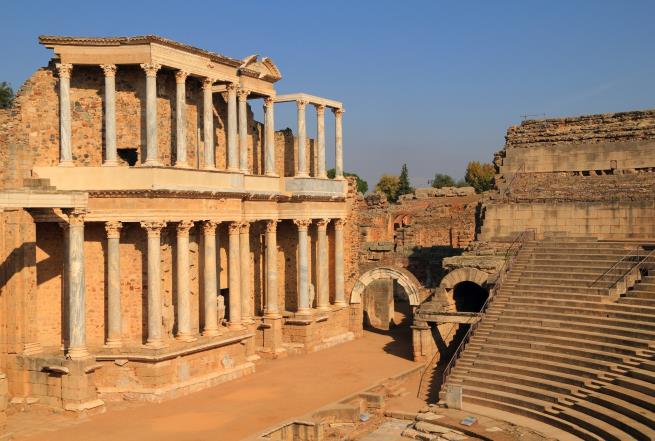 From Mérida it is a 60 kilometer drive to the sultry Zafra. On the way, visit the 15th-century Castillo de Feria. This castle flourished during the local Feria dynasty and the hill on which the castle is located offers you magnificent views in every direction.

The jewel of the originally Moorish Zafra is the sun. faded, flowery old town. Explore the 15th-century Convento de Santa Clara, where the Feria family rests in its tomb. It is not difficult to bring history here to life; the monastery is still active. Visit the palm-lined Plaza Grande and the adjacent Plaza Chics for a tapas lunch under stone arches. The imposing castle of Zafra is now a parador (luxury hotel owned by the state) and is surrounded by a spectacular marble-clad Renaissance-style patio.

The end of your Extremadura expedition is in sight. But first, go a little further 45 kilometers south from Zafra, to Monesterio. You wouldn't think so, but this modest city produces the most celebrated jamóns in Spain. It is therefore appropriate that you also find the Museo del Jamon here.

Sleep like a king (or queen) in the renovated Parador de Zafra - the former castle of Zafra, dating back from the 15th century.