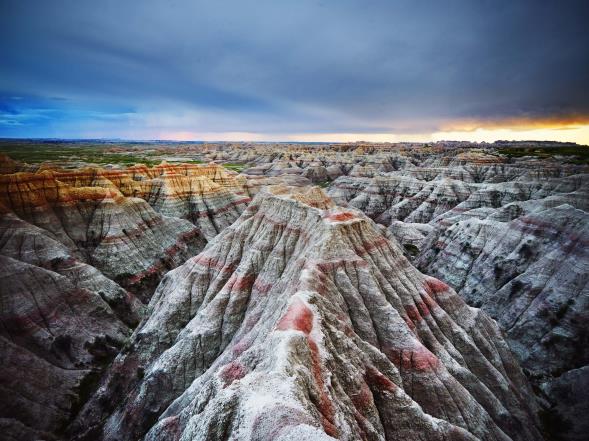 © Lonely Planet Look out for yourself: brave the colorful Badlands

Camp under the stars, search for fossils and discover the deep time in this unusual landscape.

From Big Badlands Overlook, the country extends towards the horizon like a harmonica full of prehistoric folds. On this harsh stage a heavenly drama takes place in the sky: the setting sun has dived just behind a gray line of clouds and a narrow strip of sky turns pink. It is as if someone has suddenly lit a lamp above this primeval landscape. The hills below, just dull brown, glow bright red.

These views are common in Badlands National Park, a reserve of nearly 1,000 km2 with wide skies and bizarre rock formations. It is surrounded by prairies in the heart of the US. The crumbling ridges are difficult to travel and not particularly fertile, which is why they were called Makhóšica by indigenous tribes: "No Good Countries". Nowadays, the many kilometers of footpaths makes it a little easier to cross the landscape.

"They look very old," says park volunteer Chuck Schroll, "but actually the Badlands are geologically seen only babies. "On a scale of leaps and bounds of hundreds of millions of years, the 500,000 years of the Badlands are indeed" young. So long ago the former lake area began to take shape due to the influence of rivers, wind and rain. The Badlands are now trying to make up for lost time: in one year, the soft stone weathered just as much as the granite of nearby Mount Rushmore in 3,000 years.

Older layers of stone these rapid erosions have been exposed offer a glimpse into the many past lives of the Badlands; 75 million years ago this area was under an inland sea that ran all the way from Canada to Mexico. Later, when the water withdrew, it became jungle, then savannah, and finally it dried up to the harsh environment it is today. Each colorful band of the distorted hills houses the skeletons of the wonderful creatures that once lived here, from mosasaurs - giant sea reptiles - to saber-toothed tigers and the megacerops, rhino-horned animals with two horns.

"Something is discovered every day," Chuck says, opening the door of the Ben Reifel Visitor Center. Here scientists are investigating new findings in the paleontology lab. For Chuck, however, the Badlands' greatest attraction is somewhere else - in the air above him. Without light pollution from nearby cities, this landscape is ideal for studying the universe. 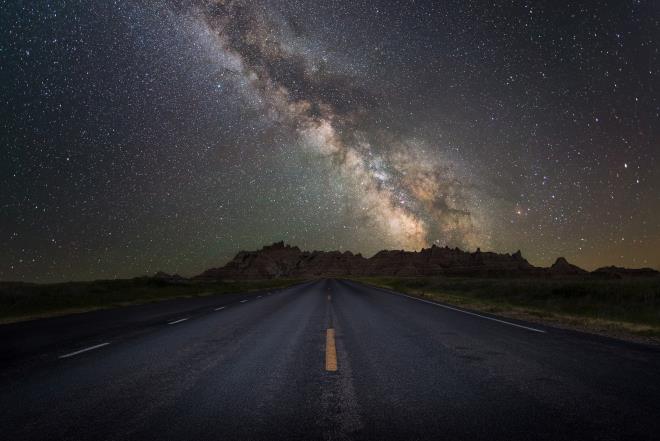 © Offered by Pijper Publishing BV Look out for yourself: brave the colorful Badlands

When falling from the night the rocks stand out dark against the starry sky. Chuck stands in the park's amphitheater and leads visitors through the cosmos. He invites them to look through a telescope at the moons of Jupiter and the rings of Saturn. But there is also plenty to see with the naked eye: the Milky Way, the constellation of Hercules and for a moment even the international space station, which orbits the Earth every 92 minutes.

On the morning after their astronomy session, the Todd family from Minneapolis have breakfast in the park. "It really feels very special here," says mother Kristen, spreading a tablecloth over a picnic table. Her children play in the high prairie grass and in the distance we see early hikers exploring the now orange-colored hills.

'When the National Park Service was established 100 years ago, the biggest thing was part of America is not yet overdeveloped, "she says. "It's great that they decided to protect places like this back then - for the benefit of everyone, forever."

The United States suffocates from National Parks. Read Experience the tranquility and space of the Grand Canyon.