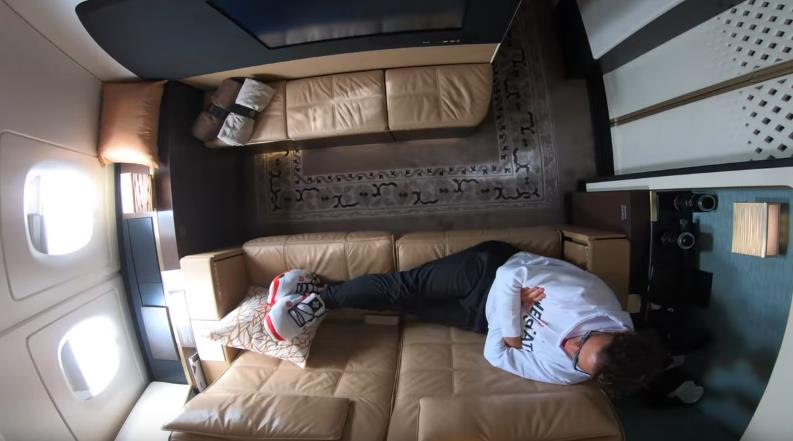 © Screenshot YouTube Most expensive airline ticket in the world

Flying is no fun for anyone. Unless you have money of course, because money makes you happy. When we see the latest video from Casey Neistat, we understand why. The YouTuber received the most expensive flight ticket in the world and let us drool over in the abundance of luxury. Whether we are jealous? Absolutely not. * kuch *

Three rooms vs a chair

The video was of course sponsored by airline Etihad, although Neistat could probably have bought the ticket itself with all those millions of views. In addition to the normal classes (economy, business and first), the A380 also has The Residence. There you not only get a chair like the rest of the crowd, but you have three rooms at your disposal. Not for sharing, everything for you and possibly your girlfriend. A living room (including mini fridge), bedroom and bathroom. How nice life is when you are rich, or a well-known YouTuber.

Of course, a flight still takes a long time. So entertainment and comfort is necessary. Naturally, this has also been thought of with complementary noise canceling headphones, a lounge bathrobe and pajamas. You don't think you have to sleep in your own clothes with such an expensive flight ticket ?! In terms of entertainment, there is wifi and in the living room and bedroom a television with dozens of films and series. But having your own bed in a private room makes it extra easy to become a member of the mile high club, just saying. If you are in need of entertainment ...

The shower is somewhat "poor". There you only have a certain amount of water and when it is finished, it is finished. A maximum of ten minutes of showering during the flight, tss… Toiletries are (fortunately) supplied, so you don't have to carry them around at the airport yourself. Well, carry on, your personal VIP Travel Concierge takes care of everything; from your own check-in counter and limousine with driver to a private lounge at the airport.

Unfortunately, the A380 does not depart from Schiphol. You can only travel to or from Abu Dhabi, London, New York, Sydney, Paris and Seoul. The costs differ per flight, of course, but for a ticket from Sydney to Amsterdam (including a stopover) you spend more than 15,000 euros. One way. We continue to dream ...